I’m voting for Trump next Tuesday.  I’m not losing any sleep over it and I won’t lose any friends over it (although it may have cost us some ?facebook friends? (if there is such a thing).  I expect next week the people who would show up to help me move will all be there after they learn who I’m voting for in this election.  But the people I feel most obligated to give a good reason for my actions to have always been my wife and kids.  They know me better than anyone and I feel a deep sense of responsibility to be consistent before them.  Integrity matters in a person.  It matters in a husband and a dad.  I’m writing this in hopes of influencing some of you who are still on the fence or leaning toward a protest vote, or a vote in the interest of keeping a good conscience – there really is nothing as valuable as a clear conscience – but the heart of this is for my wife and kids to hear why a man like me will vote for a man like Trump.  Maybe this will be useful for you.  That would be a good thing.  I pray it will make sense to them.  That is the necessary thing.

First, and most importantly, I am not casting a vote for Donald Trump or against Hillary Clinton.  These two people have many serious faults that are not to be overlooked.  Neither is particularly moral, which is important to me.  This is all water under the bridge and I’ve already discussed it in my article Trump and Poll Dancers and Trump and the Middle Finger.  I was a Ben Carson guy and then a Ted Cruz guy.  I know there are some vocal “Never Trumpers” out there, but I was a Never Jeb and Never Rubio before either of them even announced their candidacies.  The reason I felt that way is the same reason I am voting for Trump now: I am voting to pull down the real wall we should’ve been discussing during this election, the wall the elites and establishment are building and expanding and defending between themselves and We The People.  This wall has reached to such a height now that our nation is dangerously close to being governed by people so powerful and so separate that they are immune to being stripped of their power and completely disconnected from the people they are supposed to serve.  We need an outsider who won’t play nice.  We need someone who unapologetically shakes the grasp of those who hold the levers of power.  How many times in the history of the world do we have to learn the lesson of Orwell’s Animal Farm?  Absolute 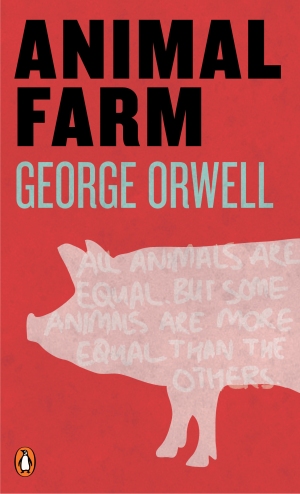 power corrupts absolutely?  Trump is a vulgarian who will not play by the rules of the system.  I believe this is useful for exposing and breaking power structures that no other viable candidate can or will expose or break.  I am voting for upsetting the power more than I am voting for a man.

Second, and this may sound like a fine point but it isn’t, Trump will almost certainly cause gridlock because of his unwillingness to play with the entrenched power players.  As a believer in limited government I find the idea of gridlock to be a good thing.  It means we might have legislative and judicial branches that will fight a president instead of allowing him to run roughshod over them and the Constitution.  It will take power away from the imperial presidency we’ve experienced for the past 8 years and it will slow down any new government initiatives to a pace that will force governmental agents to build consensus in the country so they will have mandates to act on agenda items.  This slows down the reach and the growth of government to a pace that is more in line with the pace of change the country wants it to be instead of the kind of upheaval that comes when a few elites in the establishment decide they can and should set the agenda for everyone else.  It also means that the agenda items that are passed will be the best ideas that can gain support from people on all sides of the political spectrum – no other ideas will be able to go forward.  As an aside to people who think Trump will be able to force his agenda on America because he will have a rubber stamp from Republicans in the House and Senate, well  you just haven’t been paying attention.  A Trump agenda will be fired at from both sides of the aisle from day one, and that is a good thing for everyone.

Third, the Supreme Court.  There is no comparison between the people Clinton and Trump would nominate to serve on the highest court.  It is apples and moon rocks.  Judges who, to the best of their ability, interpret cases based upon the Constitution are the kind of judges our founders envisioned on the court.  It was another check upon absolute power.  Lifetime appointments ensured a Justice would have the freedom to think and to render judgments without fear of losing their place.  The court is currently in an ideological stalemate because of the passing of conservative Justice Antonin Scalia.  Trump has already given a list of potential nominees to the court which would return it to 5-4 conservative state.  If he is absolutely stonewalled by the legislative branch on every nominee he sends for confirmation the worst case would be a 4-4 court that has to find ways to decide cases by crossing ideological lines or if they can’t it leaves cases as they are decided by lower courts. Some may find this problematic but can anyone point to a case the Supreme Court has decided lately that has made the majority of the country happy?  A tied court or a 5-4 court is a better court for the country than a court stocked with Justices supplied out of the Clinton mold who believe law is an implement of progress rather than a boundary against chaos.  I don’t want courts that create law to shape behavior; I want courts that call balls and strikes when they have to and stay out of the game altogether whenever possible.

Finally, Trump represents strength and shrewdness in a dangerous world.  I knew we were in trouble on the world scene years ago when the weekend photos of world news juxtaposed Vladmir Putin, shirtless and carrying a hunting rifle over against Barrak Obama riding a bike with his girls wearing mom jeans and a crash helmet.  Imagery means everything in world politics.  Power is projected through image.  Perceived weakness is weakness.  While his opponents try to paint Trump as a dangerous ill tempered fool who will tempt our enemies to confront us and cause our friends to doubt us, the opposite is actually true.  Trump has conducted business internationally his entire adult life and he’s done it successfully.  While war may be the natural extension of politics, business is the practice of bloodless warfare.  Trump is good at it.  He wins and he projects power.  The doubts he creates in the minds of the enemies of America work to our advantage and the checks and balances that exist in our democracy (when they are applied by the branches of our constitutional government) keep any president from exercising too much military power without getting support from the country.  I am old enough to remember the way Ronald Reagan was cast as a bumbling idiot too dangerous to be near the “nuclear switch” (as if there is such a thing).  Trump is no Reagan but he is a person who is much more attuned to the true nature of the state of the world and what it will take to restore a healthy respect for American power.  And who really thinks any other nation will use their power to improve the state of being for citizens of the world as much as America?  There is NO evidence any other country has or will do as much for non-citizens as the United States has done.

These are the reasons a man like me can and will vote for a man like Trump next Tuesday.  I believe my wife and kids can receive this and say I am a person of integrity and consistency even if they disagree with me.  And I’m ok with the result of any election when I know that.

1 thought on “Trump and My Wife and Kids”